Watch the Case Study of how one of SSW Scrum teams did a website upgrade for the National Australia Day Council:

Lei Xu and Dan Zhang, worked for CMHIT to improve their ALM process. They successfully:

is a large Chinese based company. They are an information technology solution provider specializing in the port, terminal and logistics industry. The Company provides customers with high-quality products and services with their practical experiences in marine logistics IT service.

SSW has been developing software since 1990, and has perfected the art of delivering shippable code on budget and on time using Agile techniques.

We use Microsoft’s Visual Studio ALM tools (was Visual Studio Team System) to provide the backbone for delivering software continuously. SSW can help you leverage the power of these tools to make your developers, testers and analysts work efficiently together. We also use TFS (and a dash of Octopus Deploy) to fix your deployments and improve your testing lifecycle.

In our experience the adoption of ALM occurs through a number of stages. Each stage adds another level of software maturity.

Source Control is a fundamental part of modern software development. Whether you have one developer or hundreds it is imperative that you can protect your code from mistakes and loss. TFS provides this with a comprehensive version control and branching system that stores all of its data in SQL Server. More about Source control and Branching…

Getting your process right could be the difference between a successful project and one endlessly spinning its wheels. When your project is in trouble your customers become unhappy and costs can spiral out of control. However an efficient process can help your team work together efficiently and produce that shippable unit of work you are looking for. More about Project and Process Management…

Low quality software costs the economy billions annually. This is due to poor productivity and wasted resources. There is no single silver bullet, but organizations can help themselves by using tools and processes that give themselves the best chance of project success. SSW can help you implement an effective team development strategy to maximize your development team’s productivity. More about Building Quality Applications…

Quality Assurance test professionals have two key goals: to validate the quality of an application and improve software. Yet testers often seem like an island apart from the rest of your team. To be effective, their work should be integrated in the same ALM processes and communication workflows as everyone else. They need to collaborate closely with developers and provide the rich information needed to resolve bugs fast. They also need to communicate their progress to non-technical stakeholders with easy-to-understand reports. More about Test and Quality Assurance…

If you are a SourceSafe user, you know VSS is an easy-to-install and easy-to-use source control system. TFS gives you a much more powerful system including not only version control but also work item tracking and build support.

TFS Is available in 3 editions to suit any size or scale of development team. SSW can assist in migrating between any of these editions.

This free edition supports up to 5 developers and provides all the essential lifecycle management features such as source control, work item tracking and build automation.

The full on-premise edition of TFS giving you full features and complete control of your platform and data.

This cloud-based edition of TFS is free for up to 5 users or anyone with the following MSDN subscriptions:

This is great choice for anyone looking to leverage the full power of TFS without the need to provision your own servers.

Microsoft Visual Studio 2013 can come with the following flavours of MSDN:

All of these include a TFS CAL. For “Backlog Management” and “Sprint Review” features you need “Visual Studio Test Pro 2013 with MSDN” or higher

Visual Studio 2013 Lab Management is an integrated solution to give you all the benefits of virtualization for application lifecycle management. It extends the existing VS ALM platform to enable an integrated Hyper-V based test lab, allowing you to automate your testing process, on a variety of environments that can be setup to your needs. 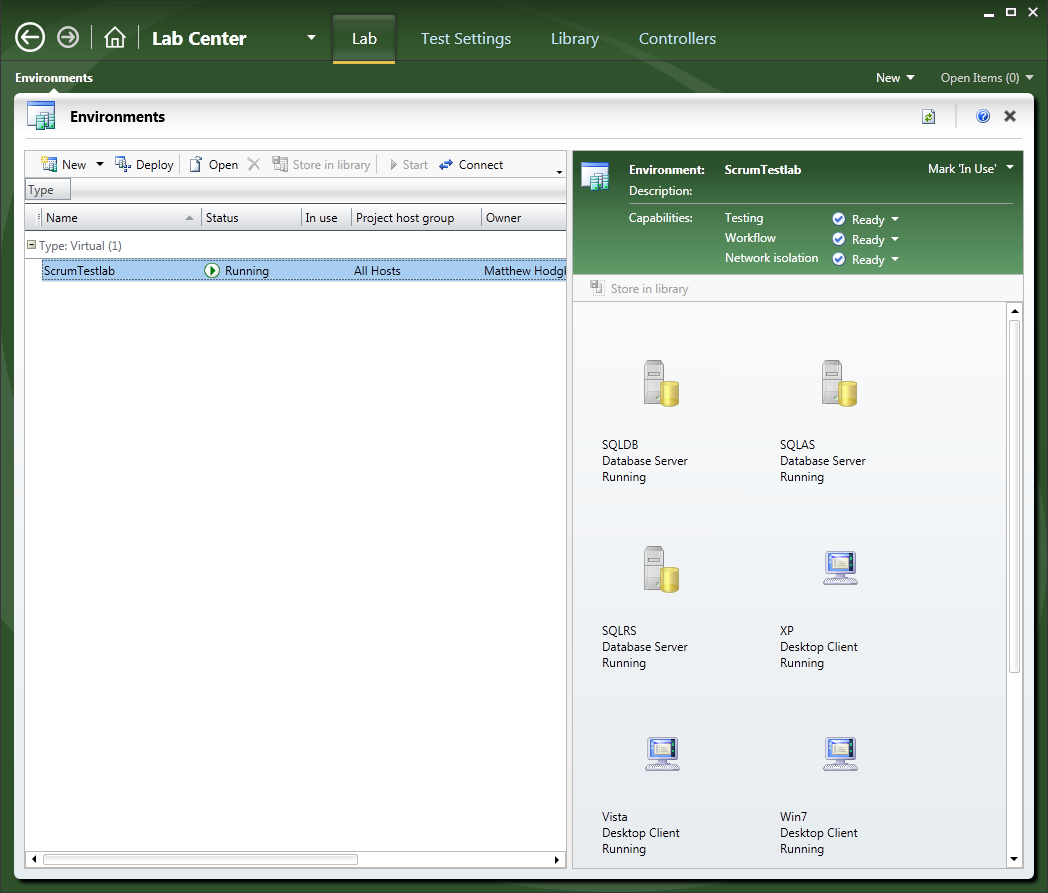 Figure: Using Lab Management in TFS 2013 you can automate your testing process

With the addition of Visual Studio 2013 Team Explorer Everywhere you can now connect most development platforms to TFS 2013.

“We had Adam Cogan in at Vertigo who delivered great TFS 2010 training. TFS is a very powerful product that can make your software organization immensely more efficient. To get the best out of it, training and implementation is best left to experts. SSW certainly has such experts.”SCOTT STANFIELD, CEO OF VERTIGO SOFTWARE, INC.

“We had Adam Cogan and Martin Hinshelwood as TFS insiders. They had access to early builds of TFS 2010 and gave lots of feedback to make the product better. TFS 2010 is our best version yet and software teams step up to the next level if they use it well. I recommend Adam and his team for training and implementation.”BRIAN HARRY, TFS PRODUCT UNIT MANAGER

“While many people have ideas for process improvements, it’s usually best done by those who have done it before. Having worked in one organization that Mark Hetherington transformed with a thoughtful implementation of JIRA, I sought out his help for another. Twice proven, I cannot recommend Mark enough.”ANDREW SKINNER, TILEFILE LIMITED (SYDNEY) AND INAGO INC. (TOKYO)

How many developers do I need before I need TFS?

The short answer is: one. Whether you have one developer or thousands, TFS will scale to your needs with an excellent pricing model that competes with VSS. If you already have MSDN, you can use it with no extra cost.

I use free Open Source products so I don’t need TFS, do I?

If you add up the cost of managing and maintaining the many products that you use to provide a similar solution I think you would be shocked. Usually it is your developers who absorb this cost making it difficult to quantify. With TFS all your support comes from one company and with prices starting from free (with MSDN) and unmatched scalability there really are no competitors up to the job.

We use the TFS Integration Platform to get your assets moved over. Be aware we can sync (not just migrate) an on-premise TFS to TFS Service.

Note: We expect the TFS team to improve this soon.
E.g. Have TFS Visual Studio expose an option “Download a zip of last night’s collection backup”
So the collection can be attached to an On-Premises server

And then later…something like detach on premise collection, zip a backup of the database and use an “import” procedure on TFS Service.

We publish tech videos, hold free events with giveaways and write a mean blog post about the latest technologies in the .NET world. Leave an email and you'll be first in line for free content.